Yes, another Founders review. This one will be short and sweet. Unlike its centurion sibling, the Dry Hopped Pale Ale.

On my way to pick up a chinese, while en route I decided, I would try another of the Founders Stable, knowing these were in my local O’Briens (conveniently near the chinese)

Cascade Hops, I love em, they are fresh and vibrant, and are plentiful here. The beer pours a lovely amber colour with a vibrant white head. There is a lovely citrus fresh aroma. I honestly preferred this to the Session IPA, a little less bitter, but I enjoyed it more.

Weighing in at 5.4% this is quite nice for an American Pale Ale. This is the little brother, with a Ratebeer average of 88

Well renowned American Brewers, Founders have finally hit our shores, being distributed by Grand Cru Beers. I actually stumbled on their All Day IPA Session Ale in my local O’Briens who have been steadily increasing their craft beer offering with many types and nationalities represented.

Recently there was a meet the brewer event in Against the Grain sadly it conflicted with other plans. But I believe a great night was had by all, and apparently the brewer is originally from Drogheda was back on holiday – working holidays eh. 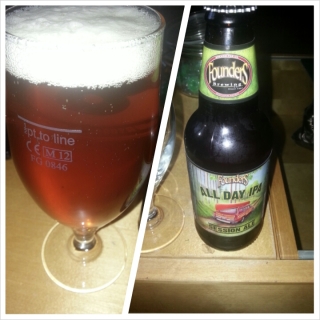 Reasonably priced too in around the €3 mark. At 4.7% its very sessionable compared to the average IPA coming across the Atlantic. However carries a bit more punch than say Dead Pony Club.

It has a nice fresh aroma, pours a lovely amber colour with a nice rich head. The familiar citrus aromas of grapefruit and lemon were there and a nice feeling as it went down.

Its a very nice session IPA, and its a lot less severe than others i’ve tried, i’m looking forward to trying more of the range over the next while, as it appears we now have a steady supply coming to our shores.

So payday comes around, and you say to yourself, i must resist the urge to splurge.Usually its easy to restrain myself. However this time, I had a One4All voucher which was accepted in O’Briens (www.obrienswine.ie / @obrienswine)

Anyway, after doing the grocerys we decided to hit up our local O’Briens. Dean will know i’ve been pining for Kona, especially Longboard since we got home from our holidays, alas, there was no kona in O’briens Navan, maybe next time. But there was plenty of other stuff.

Special Offers that stood out, 4 x Crew IPA for €10 and 4 x Rogue American Amber Ale for €10. The Crew Special Offer was mentioned on a previous blog post.

Again it was disappointing none of the Irish stuff was on Special, the 8 Degrees Knockmealdown was including in a 5 for 11 or 6 for 11 quid promotion, but lets face it, the current balmy weather isn’t really stout/porter weather. Come on O’Briens, promote the home grown stuff too!!!

Anyway, here’s the stash this time round.

Well thats most of it, this is the craft stuff, there was other stuff in there, but this is a collection of stuff i’ve not had before, or in a while. I know I reviewed Crew IPA, but at that price I couldn’t refuse.

Anyway, here’s the line up.

So i’m looking forward to sampling these, and sharing my thoughts over the next few weeks.

If a major chain like O’Briens is beginning to carry a wider range like this. This is only a good thing for the Craft Beer afficionados in Ireland.

A German IPA. I must thank Paddy from ATG for pointing me in the direction of this when he was running the Brewdock. Thanks Paddy!

Considering some of the costs of IPA Beers in our Craft Pubs it was a pleasant surprise to see this one coming in comfortably under the €6 barrier. Versus say O’Dells IPA which i’ve seen selling for above €7. This represents a really good value option.

So the humble IPA, was developed  as a way of ensuring beer could be sent to far flung corners of the British Empire in the days of yore. High hop and alcohol content to survive the perilous journey.

Infact, the powerful hop flavour isn’t for everyone. But i suppose those colonial soldiers didn’t really care about that did they, they just wanted the booze.

The first thing that comes to mind when you pop open the bottle is the unmistakable aroma, hops, but really fresh smelling. With citrus smelling notes. It pours a deep orange colour into a nice glass, and a nice head. I take a big breath and take my first mouthful. I’ll be honest, I loved it. Despite the large amount of hops, it didn’t really take your breath away like some IPA’s can.

I was really impressed by this beer, which is brewed under the well known purity law “Reinheitsgebot” so there is no rubbish in here.

I’ve not seen it in too many places, mainly in Brewdock & Against the Grain and other craft pubs, but its improving in availability as it’s currently on special offer in your local O’Briens Off License, 4 x 330 ml bottles for €10.00 which is a cracking good deal in my opinion.

We all know Germany is famous for its beers, and it seems this would go nicely with a nice Bratwurst with Sauerkraut and mustard! Mmm.

Anyway, onto the scoring. The quality of the product is a 5/5 for me. Though availability is quite low but i’m sure this will improve as it gets better known, you can pick it up in most good independent off licenses, I know the lads @ Drinkstore have it in, and with nationwide in O’Briens I hope more and more people try this fantastic beer. However availability wise it only scores 2.5/5.

Now fly out and get some!