Quite recently we celebrated our seven year wedding anniversary, and decided to visit the town we got married in, Trim! My original idea was to dine in the Knightsbrook Hotel, the venue of said wedding, until I engaged in some twitter activity with a nearby restaurant called StockHouse Restaurant. So on a rare sunny Sunday off we hopped on the short bus journey. We started our day off with a couple of drinks in Trim Castle Hotel. We both enjoyed a stunning pint of Rua, a red ale from local brewery Bru. This is the only craft beer option on draft, but you’ll also find bottles of their IPA Ri.

The StockHouse Restaurant is right around the corner from the hotel so we really didn’t have too far to walk. Upon arrival I was thrilled we had a reservation as it was quite busy. After a very welcoming and friendly greeting from Tom, one of the owners, we were shown to to our table and handed menus and cocktail recommendations. I noticed on the drinks menu they pride themselves on their range of Gin. On the beer side we were delighted so see they support local with stocking a range of bottled beer from Bru Brewery along with Boyne Valley Cider. 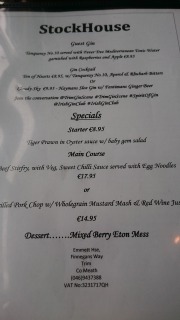 To get us started I chose “Cloudy Sky” made from Haymans sloe gin with Fentimans Ginger Beer while Wayne chose “Ten of Hearts” Tanqueray N0.10, Aperol & Rhubarb bitters. We enjoyed these very much as we looked over the menus. There was so much choice we both decided to go with the Early Bird Menu.

For starters no surprises in what Wayne picks, chicken wings. In his infamous words “I judge places on their chicken wings”. I don’t remember the last time he had something different. For me I chose the black pudding salad. We were both more than happy with our choices. Wayne actually uttered the words “best wings in Meath”. They were a decent sized portion with a generous dollop of blue cheese and garlic dip on the side. My black pudding was tossed with saute potato, bacon bits, lettuce leaves with a perfectly poached egg perched on top. Personally for me I would’ve preferred it without the potato. It was a beautiful dish and I couldn’t help myself stealing some of the blue cheese garlic dip to mix in.

For main course Wayne chose the striploin 8oz steak cooked medium and served with chunky chips and garlic butter on the side. While I decided on the confit duck leg served with herb stuffing, savoy cabbage, red onion and a spiced plum sauce. I chose garlic potato to accompany mine (good thing we’re married and both like garlic). Wayne devoured the steak and really enjoyed it. My duck was so tasty it fell off the bone. Both were thoroughly enjoyable dishes. Of course we had to have a beer, Wayne chose Bru Ri as I had Bru Rua. The beers were well suited to the dishes (perhaps something to use as a recommendation on the menu).

Needless to say we were both stuffed. When offered the dessert menu we politely declined. We took our time to finish our beers before ordering two espressos. During the course of our meal I found the staff very friendly and attentive without being intruding. It’s a very comfortable restaurant with a really lovely vibe. The walls of the restaurant are adorned with photos of the historic town and county. Before we were about to ask for the bill, Mick and Tom both presented us with a beautifully decorated surprise dessert, a mixed berry Eton Mess. So much for being stuffed, we devoured it.

This was an extremely lovely visit to Stockhouse Restaurant and very good value for money with two courses on the early bird for €21.95 and the cocktail specials starting from €8.95. For €83.20 excluding tip it was well worth it. Thank you to Tom & Mick and all the staff for a wonderful experience we really enjoyed it and are already planning a return visit.

//platform.twitter.com/widgets.js
Our day didn’t stop there, it would’ve been rude to be in Trim and not stop in to see Rodney in The Malthouse for a few beers. “We’ll stay till the 16.50 bus” ha yeah right, why stop there when you’re having fun. A few beers, laughs and a taxi home later that night saw the end to a fantastic day.

One thought on “Always Sunny in Trim”