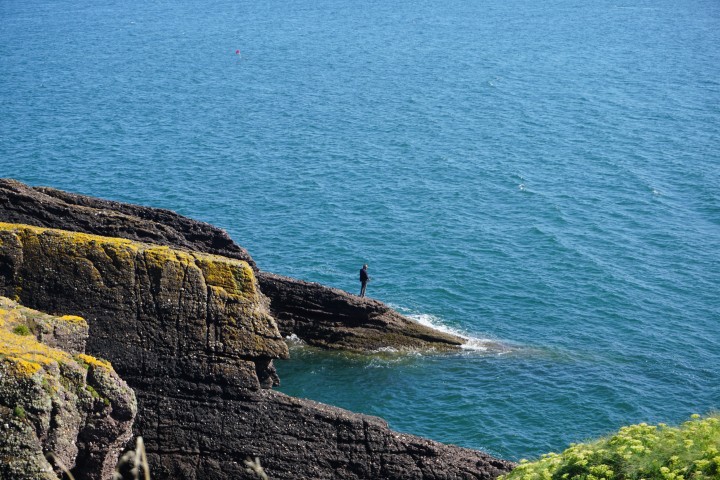 Late in the summer, we decided to go down to Waterford for a couple of nights, I hadn’t been down myself in easily 15 years, and Mrs Beer Snob maybe about 10 years. Only about 2 and a half hours from Navan thanks to the motorway network.

We stayed in the Waterford Marina Hotel, we got down there a little early to check in, so given it was a lovely day we decided to drive out to Dunmore East which to say was absolutely stunning in the late summer sun. We walked from our parked car down to the harbour and saw lots of kids enjoying an obstacle course. I really regret not jumping in myself! After a little while exploring we decided to have a pint in Powers Bar, a traditional pub, and pleasing to see there was Metalman on tap.

From there we made our way back into the city armed with a desire for some seafood we headed to The Reg for the seafood platter for Two. Washed down with Metalman Pale Ale, this was an extremely tasty bite after hearing one or two mixed reviews, we were very happy with the food on their sun terrace. €32 for the platter was very good value in my opinion.

After that we went exploring the streets, as  Waterford Walls event was on, and dotted around the city there were gable ends, and walls painted with excellent pieces of art.

We made our way down to Tullys, long recommended, and very good recommendation. In Tullys we’d a couple of lovely scoops, 12 Acres Make Hay and Metalman Tiptango where we met Yellowbelly’s very own Declan Nixon for a jar.

We’d also been recommended a visit to J & K Walsh‘s which was an old grocer shop but has been lovingly maintained to retain it’s old world feel. A place to go to drink Guinness, which is served in a Tankard, do not miss this spot if you’re down in Waterford

From there we walked out passed the Applemarket area where there are quite a lot of bars that look pretty lively, but we walked on passed, and visited Grady’s Yard, which is the bar owned by Yellowbelly, we visited both days the Monday evening was pretty quiet, which isn’t unusual, but when we visited again on the Tuesday, they were hosting a board game evening and there was a good crowd in there where we bumped into Will Avery and Mark Nixon from Loughran Family Malts. Our only regret was we came down when the kitchen was closed, as the food that is on instagram, is totally drool worthy.

Handily enough, Grady’s yard is only a short walk to Phil Grimes bar, which looks like , dare I say, a normal pub from the outside, not an obvious den of great beers on draught. With what I have to say, the friendliest owner i’ve come across in many years. Tom is a breath of fresh air, again on the Monday it was quiet, so we had his undivided attention as we supped a few beers before we went off to bed. We were chatting about doing the Waterford Greeenway however, not having as much mileage over the summer on our bikes as we’d have liked we were very much on the fence, plus the weather was forecast to be grey, rainy, and not as nice as the Monday. This is when Tom’s extensive local knowledge, led to him recommending that we do the Copper Coast Drive which was a great substitute for the greenway itself, where there were some absolutely stunning sea views, and coves along the way, as we went to Dungarvan, but we also went up to Mahon Falls, and even found a magic road! Waterford, you have a gem in Phil Grimes, and Tom couldn’t have made us feel more welcome. Sláinte Tom 🍻

On our second day, we visited Dungarvan, via the Copper Coast Road, after a morning exploring some lovely hidden beaches we had built up a hunger and we popped into Merry’s Bar in Dungarvan for a spot of lunch before popping to Dungarvan Brewery to see Claire and Cormac. It was great to catch up with Claire and to find out how things were going as we’d not seen them in a while. It was interesting to hear that most of their beer is sold locally which after all what this is all about.

After getting back to Waterford we went for a lovely dinner in the Bodega restaurant, and visit Grady’s Yard and Grime’s again before going back to our hotel for a nightcap, where the night porter was also one heck of a friendly man who had no issues pouring us Gin and Tonics in the small hours, while telling us about Waterford’s history.

One the way home we popped in to see Grainne & Tim of Metalman and had a coffee with them while we had a look around their brewery which i’m sad to say we’d not been to before. They’ve a nice space quite close to the city centre, and echoing what Claire in Dungarvan was saying, most of their produce now goes locally which is great to hear

Waterford, I feel we only got to scratch the surface, but what and enjoyable couple of days.