The weekend that Storm Doris was lashing the UK & Ireland out of it seemed like as good as any to drive down to Wexford to brew a beer with that awesome bunch of lads at Yellowbelly.

We’d hatched a plan to brew a collaboration beer with Yellowbelly as part of Sheffield Beer Week. We were over there to attend Beer Now, and the stars were aligning. I’d met with Declan and Danny in Bar Rua one evening after work to discuss, the plan, the concept was simple, make a Pale Ale / IPA that paid homage to that most awesome of soft drinks, Rock Shandy. An awesome thirst quencher in a glass, mix of Orange and Lemon. The lads came up with the name!

In fairness, the lads were also in the middle of commissioning their new Wild Goose canning line, having worked through the night to package their Lager in cans, they were still working at the brewery as we were leaving the house at 530 that morning. We met the lads in the brewery and got a sneak peak of the machine, and their new bigger brewery. 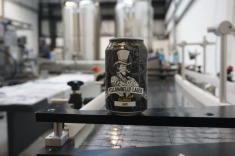 So after a quick breakfast in Simon Lambert’s, which was delicious I must say, we began on the brew. The recipe was really simple. Pilsner Malt, Jumbo Oats, and some dextrose. We used Lemon Drop to bitter, and used Azacca with Mandarina Bavaria as late addition / Whirlpool hops, with some fresh Orange & Lemon zest. It finished up at 7.2%. 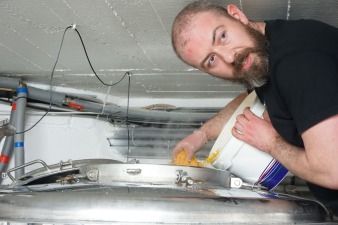 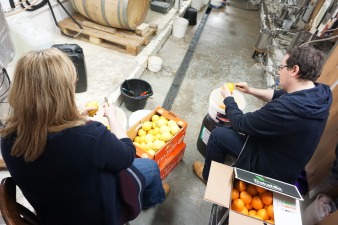 A few short weeks later we found ourselves in Sheffield, in the UK for Beer Now, and Sheffield Beer Week which was set up by our good friend Jules Grey. Ran every March it’s a veritable treat for all beer lovers with many events. We were going to be part of the YellowBelly TTO in The Sentinel Brewery & Tap House, which i’ve written about here. For the night they developed an Irish food menu to go with the beers. It was great to have the beers with friends who’d come from far and wide to share this moment with us. 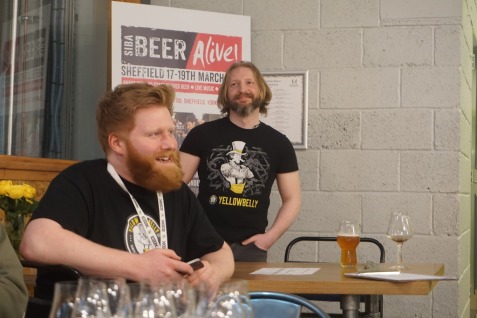 The brewday was a long day but Declan and the lads, made it a good laugh, and it was great to have some grub and beers after with them. Next time I have to try a rizzole, after seeing Matt from Boundary enjoyed his so much.

Janice and I are extremely grateful to the team in Yellowbelly for firstly being such a sound bunch of lads, but also for the opportunity to brew with them. It was great sharing beers with them in Sheffield and hopefully we’ll be doing the same next year. It’s great to see where they’ve come from to where they are going and no doubt they’ll continue knocking it out of the park. Sláinte